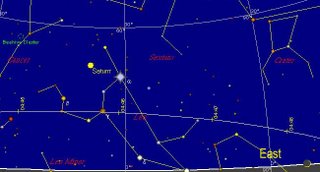 The north-eastern horizon looking north east at 4:46 am from Adelaide on Saturday 21 October (click to enlarge).

As I wrote before, there are several other things to entertain us as we watch for Orioinids in the early hours of the morning on Saturday and Sunday. In Adelaide, there is a -5 irridium flare in the north-west at 3:56 am on Saturday, then the ISS passes below Saturn at 4:46 am. Most of South Australia and the Southern Northern Territory sees this. In Alice Springs the ISS passes between Saturn and Regulus at 4:43 am. In Brisbane there is a -1 Iridium flare on Saturday at 3:33 am in the northwest, and the ISS passes above Saturn on Sunday about 4:03 am. Most of the rest of the East Coast and Darwin is dissapointing in terms of the ISS or Iridiums, but check Heavens Above closer to the date for updated information for your site.

As well, there is a coronal hole on the Sun pointing our way. A stream of charged particles is expected to hit sometime around the 21st, so when out looking for Orionids on Saturday and Sunday, keep an eye out to the south for possible aurora in you are in Tasmania or Southern Victoria.

Also, don't forget to check out the SOHO Lasco C3 camera on the 22nd for the lineup of Mars, Venus and the Moon.

Well, its weird, Okay.
Orionids on Saturday and Sunday (21-22 Oct)
Night and Day on an Exoplanet
More Comet M4 SWAN
Mars Venus and Spica
Saturn, Moon and Spica (Tuesday 17th)
Mercury Rises [the two bright "stars" at the botto...
There's a Flare in There
RedSpot Jr. Again
12.76 second of fame