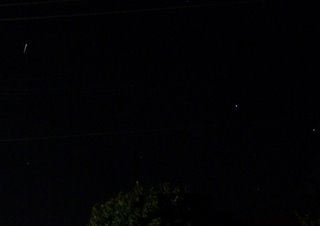 Tonight the clouds squatted on the horizon like malignant toads, preventing me seeing the lineup of the Moon, Mercury and Jupiter. So I'm posting an image from last night of an Iridium flare that almost got away (naturally tonight's was clouded out too). Click the image to enlarge it. The flare is the bright trail off to the left, the two bright stars are alpha and beta Crucis.

After the successful capture of the ISS passes, I resolved to capture an Iridium flare with my digital camera. Because the flares are so short in duration, you need careful timing to catch them when your exposure time is fixed at 6 seconds.

From Adelaide we have been treated to a series of bright Iridium flares happening almost due South, but only around 18 degrees above the horizon. On Saturday I missed the flare completely, on Sunday I was still setting up my camera when the flare appeared. So on Monday, I had got out early to set up and was waiting confidently as the flare began. I pushed the remote ... and nothing happened. Several increasingly panicked pushes later I noticed that the IR beam was facing AWAY from the camera. A quick reverse and I was able to capture the tail end of the flare (fading from -6). Better luck next time.