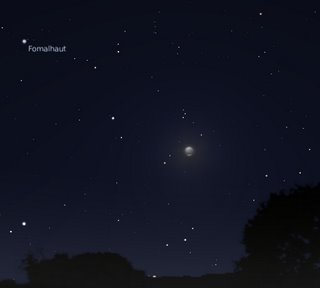 The western morning sky at 4:45 ACST Adelaide. Similar views will be seen in the Southern Hemisphere at equivalent local times.

Night Owls will have a bit of a show in the very late evening of Thursday 7 September and early morning Friday 8 September.

At roughly midnight on the 7th (roughly 10:00 pm in Perth), the Moon will occult Uranus. This is strictly a telescopic occultation, as Uranus's measly 5.7 magnitude will be drowned out by the Full Moons light. Still, even in a modest telescope Uranus's tiny disk should be seen going behind the Moon (for local occulation times see here). The Full Moon will be high in the sky, and Uranus should be obvious in a telescope.

If you wait a few hours after that (roughly around 4:00 am except WA, which is more like 2:00 am) , you can see a Partial Lunar Eclipse. Visible mostly in Australia, SE Asia, India and East Africa (see visibility map here), it won't be spectacular, only 19% of the Moon will be in Earths shadow, but it will be better than the last eclipse we had, and fairly nice. Local contact times for Australia are here. In an earlier version I wrote that Darwin will miss the eclipse, it won't, it will see the whole thing.

Comments:
This would be an interesting occultation to observe and would have provided a useful test of a new Celestron solar system imager but alas the weather forecast for Sydney is not encouraging!

Hope it is clearer in Adelaide.

And don't forget there's the shuttle Atlantis launch on NASA TV too.

Thanks for reminding me of that Karen. So have to watch with one eye while setting up the scope.

After days of much needed rain, it looks like the skies might be clear tonight, but then I don't have a new toy to play with Rob.
"Interesting observing event, new toy & rain - an inevitable conjunction!"