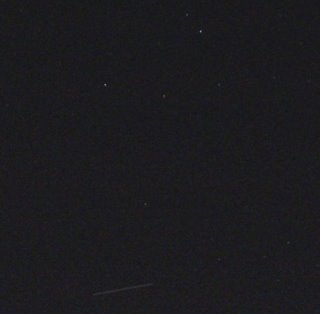 In the tradition of my faint fuzzy photographs, I present the trail of STS-115 (it's the dim streak down the bottom. People with older monitors may struggle to see it, try clicking on the image to enlarge it). This would have probably been better with the film, rather than digital camera.

So I got up at 4:55 am and set up the Olympus, I set the camera up facing the Southern Pleiades, as both the shuttle and the ISS would pass below it. After some anxiety that I missed it (the Shuttle appeared about a minute after Heavens Above predicted it), a bright point appeared near Triangulum and began to glide across the sky.

Unfortunately, the shuttle was at its brightest in triangulum, and dimmed significantly by the time it glided past the Southern Pleiades. So the picture isn't the best.

As the Shuttle headed for the eastern horizon, the ISS appeared, and followed almost the path of STS-115. It was a little bit dimmer than the Shuttle, but I got some images of that as well (which I will mercifully spare you. But there are far worse ways to spend a morning than watching the Shuttle and ISS fly past in the early dawn.

Comments:
I believe you have them the wrong way round. The ISS is ahead of the shuttle. Shows on NASAs situation board & how they talk about it at NASA. NASA says the shuttle is catching the ISS at 43 nautical mile per hour.

Howver, both on Heavens Above and the orbital elements I've downloaded the STS-115 is ahead of the ISS (Ie STS appears first, then ISS). The Shuttle is just 1 minute "ahead" now in the latest elements.

I don't know. The predictions from Heavens Above and the file I downloaded into SkyMap were the opposite way around (with the STS coming up at 5:02). This morning the HA predictions were STS 5:26:33, ISS 5:27:02 (last night the STS was prdicyetd to be one minute ahead). Maybe there is something wacky in the prediction tables? Anyway, check out this mornings image :-)

Karen Wrote: "You have a trail of one or the other!"

Actually, I have a trail of both. I'll assemble the images into an overlays showing both tracks later tonight.

Jupiter and Zubenelgenubi 2
You too can see the Space Shuttle (as a dot)
Someone got to see the partial eclipse.
SMART-1 Kicks up some dust.
Meanwhile, over at the Pandas Thumb
Jupiter and Zubenelgenubi
Eclipse and Occultation clouded out
This won't suprise anyone
The Competition Results are In!
Occultation and Lunar Eclipse This Thursday Night/...