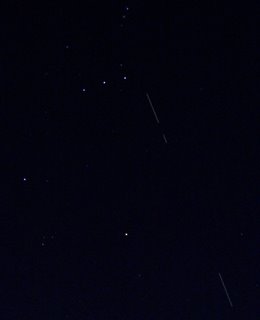 This time I thought I'd do it right. I got up at 5:10 am and set the camera up, rechecked Heavens Above for the latest prediction (STS-115 was coming upat 5:26:33, 1 minute later that the prediction last night,), and positioned my camera for the start of the track. You can see that below, STS-115 rising above our roof through Grus.

Now Heavens Above (and the most recent orbital elements) had STS-115 rising 30 seconds before the ISS, but unlike yesterday I only saw one dot, so I suspect they had already docked. The rising pair were brightest just above my roof.

I then rapidly shifted the camera to Orion, where they were supposed to pass through. My set-up was off though, I only caught the bottom half of Orion and missed the STS-115/ISS going past Rigel (rats). 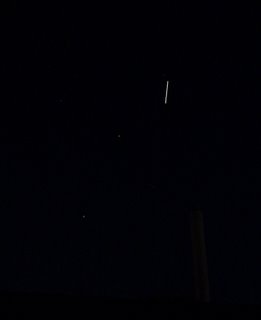 STS-115 and the ISS above my roof, passing through Grus. (click to enlarge, this one's rather muddy in thumbnail)

The Grus flare is a single image, the Orion image is an overlay of three images, capturing two sections of the STS-115/ISS track. Individual images had dark frames subtracted and were stacked using The Gimp.

Comments:
Lucky you, to be able get images of STS and ISS!!!.Unfortunately,here in the USA (or at least in my neck of the woods),won't be seeing either for the for seeable future.Keep the images coming!!!