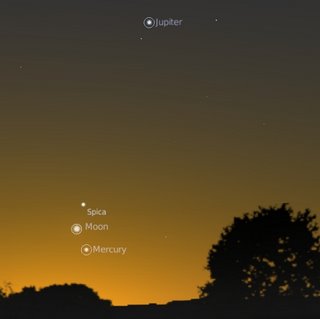 Mercury, the Moon and Spica as seen above the western horizon from Adelaide on September 24th, at civil twilight (18:38 CST). Similar views will be seen at civil twilight (about half an hour after sunset) elsewhere in the Southern Hemisphere.

Over the next few days we will see Mercury, the Moon, Spica and Jupiter do some cool things.

On Sunday 24th, the thin crescent Moon forms a triangle with Mercury and Spica. On Tuesday 26th the crescent Moon is near Jupiter. Over the week Spica and Mercury come closer, being closest (a fingerwidth apart) on Wednesday and Thursday (27th. 28th).