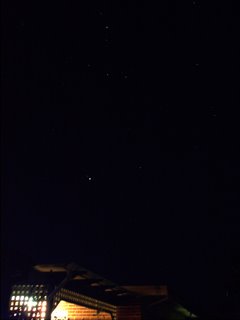 Jupiter shines near alpha Librae. As usual click on the image to enlarge it. You will need to, the original image shows stars down to magnitude 5.5. The thumbnail doesn't even show Zubenelgenubi (alpha Librae).

Watching Jupiter and Zubenelgenubi draw closer over the past few nights has been nice, but only tonight could I image them. And I was really pleased with how the image turned out (not that you would know it from the thumb nail). I took 4x6 second images on my Olmpus µ300 using the night image feature, and a dark frame (by putting the camera bag over the lens and taking picture. Each image was loaded into GIMP and the darkfame subtracted by loading as a layers using the difference feature of the layer menu to subtract the darkframe.

Each image was saved individually, the realoaded again, with image 1 as the base image and the others as layers. The images were aligned using difffernce, then once alighed, adeed using, well, the add feature of the layer menu. Previously I' been using screen, but add works much better, and I got down to mag 5.5 stars with no trouble. Colours were failry obvious on the original and the 800x600 scaled version I've uploaded here. I think I'll go back and restack some of my Orion and Crux images.

You too can see the Space Shuttle (as a dot)
Someone got to see the partial eclipse.
SMART-1 Kicks up some dust.
Meanwhile, over at the Pandas Thumb
Jupiter and Zubenelgenubi
Eclipse and Occultation clouded out
This won't suprise anyone
The Competition Results are In!
Occultation and Lunar Eclipse This Thursday Night/...
More SMART-1 images