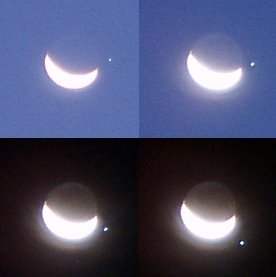 The Moon glides past Spica in the early evening.

Well, my astrophotography jinx stayed away for one night. The sky, which was cloudy for most of the day, cleared up in time for me to take some shots of the Moon near Spica. Unfortunately, the event occurred just on top of our family dinner, so I had to rush around a bit putting out the dinner things and taking the odd shot.

I couldn't do any telescope imaging until dinner was over. So Spica was past its closest approach and wouldn't fit into the frame in one shot, some assembly was required. Anyway, it think they came out reasonably well under the circumstances. I also got some shots of a shadow transit of Jupiter. I'll process them later.

Spica above the Moon, mosaic of 3 images (not guaranteed to be perfectly aligned. Click to enlarge the image.

Occultataion of Spica tonight (Monday 28th)
The Pain of Pluto's Passed On Planethood.
Morning Saturn and Venus
Pluto is dead, so lets have a competition!
Pluto is not a planet anymore
Mars and the Crescent Moon
They are probably voting about Pluto as you read this
Where's Mercury Now?
Important Dark Matter News
The Futures so Bright, I Gotta wear Shades