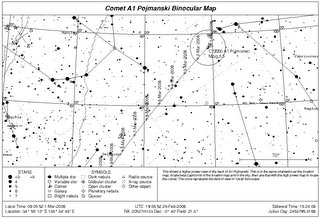 (click image for a larger, printable map, or go to Southern Skywatch's comet section for a better quality version). Pojmanski is below Alpha and Beta Capricornii, headed for the horizon, this is probably the last week for Southern Hemispherians to catch it.

Comments:
This is the anonmous person from the other Pojmanski post. I just really started getting into space so I'm not the smartest on this stuff and I live on the northern hemisphere. Do you pay attention to the northern hemisphere or just the southern? If you do where do you think I should look and what time? I hope thats not too much to ask. Kinda sounds like I'm nagging you, sorry if I am.

I mostly do the southern hemisphere as a) I live there, and I know what the sky looks like (and I can groudn truth any of my pronouncements) and b) the northern hemisphere has a fair few dedicated observing sites whereas the Southern has few.

That said, the spotters maps I put up at Southern Skywatch will help a fair bit. The binocular map is particularly relevant (although the location of the guide stars will be a bit "side on" compared to the way I've drawn the map).

Basically, you need to go out about an hour and a half to an hour before sunrise. Face East. Venus is very obvious as the brightest object in the sky, below that will be the stars alpha and beta Capriicornii, of to the left/north is the three bright stars of Aquila, A bit more to the right/east is roughly where the comet is, and this is the area that the binocular map shows (very roughly, the comet currently lies at the intersection between a line drawn from apha Aquila to the horizon, and from Venus to the horizon).

Thanks for the help