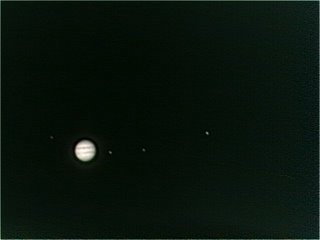 (click image to enlarge). The animation (Warning 860 Kb) is here. Timing is everything, in comedy, brain surgery and eclipses/occultations. I was up early Thursday morning for a triple feature, an eclipse of Io, the ISS passing just under Venus and of course our friend Comet Pojmanski. Now, for serious eclipse/occultation timers in Australia, life has been hard since the short-wave time signals were abandoned. My needs aren't so great, so I use my mobile phone. Telstra has set up some sort of automated time synchronization for their mobiles, my phone is the same to the minute as my computer when set up with atomic clock synch.

Of course, none of this helps when you read the AEST of an event instead of the ACST. So there I was, trying to juggle images of the occultation of Io and the ISS flyby, which were supposedly nearly on top of each other. However, at the allotted time (by my notes) Io was very un-occulted, and the ISS passby was fast approaching. Was I going to have to run the webcam while trying to activate the cable release with my toes?. A quick rush back to the almanac revealed it was going to be half an hour later. All that panic for nothing!

Anyway, I am very happy with the animation. This represents an animation of 11 separate images roughly 5 minutes apart. I say roughly, as I had to do a planetary image first, the shoot the exposure up and do a Moon exposure. This resulted in 22 images (at 14 Mb each). I pasted the planet image over the overexposed Moons image to generate 11 unique images, then stacked the lot in The Gimp, and animated the stack. Not too shabby if I say so myself. The Great Red Spot rotates into center view (it looks more like a gap in the bottom cloud band), other cloud features can be seen to rotate. Io blinks out quite nicely (I actually caught it fading in one frame, but stacking messes that up a bit). The images aren't as crisp as I would like (the warm morning ment a more shifty atmosphere), but the rotation and orbiting of the Moons is reasonably smooth for a manual stacking. Next challenge, a shadow transit.