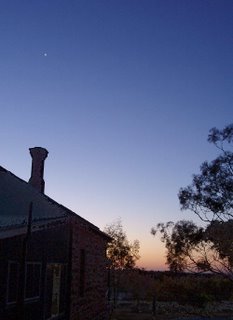 Venus setting over the Sandy Creek Youth Hostel (as always, click to enlarge).
I love going to Sandy Creek. Well, as I've written before, I don't so much love the going to part. Smallest one going beserk, the rushing around to leave on time, the discovery down the road that some vital toy or game has been left behind. That I could live without. But being at Sandy Creek YHA is a delight. Clear skies, beautiful bush walking tracks just outside your front door of a variety of lengths that the kids can do at least a bit of walking on. The variety of animals that live around you is pretty astonishing too. 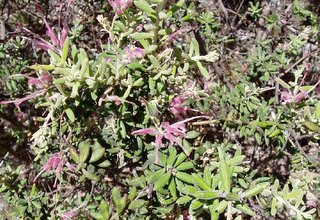 They have been putting in new walks at Sandy Creek to replace the old eroded walks. We stumbled over part of the new tracks last time. This time we did the new Wren walk all the way around. Saw some large Euros (a kind of wallaby). In the afternoon we played bush cricket, got boomerangs stuck in the trees and futilely tried to fly kites. Pointed out Venus in the daylight and saw it as a crescent in binoculars.

Then we had a big birthday bash for the Bettdeckererschnappender weisles hemi-semi-demi cousin. Risoto and chocolate cake with sparklers, the lot.

After that I showed the kids and the adults crescent Venus, the Moon (Copernicus really vividly sharp, and mountains casting long shadows), Mars (it was pretty much a rudy disk in my 50 mm refractor) and Orions Nebula. With the Moon past first quarter the nebula wasn't spectacular, but the skies were darker than Largs North without the Moon, so it was pretty good. The adults were more entranced that the kids, because the kids were pretty well exhausted. But everyone enjoyed looking at the sky.

We finished off with coffee on the Veranda, watching the lowering Moon silvering the fields before us. What a way to spend the weekend.

It was a great time. I should have mentioned that friday night, when we went up, the Bettdeckererschnappender weisle's hemi-demi-semi- cousin, partner and kids were already there, and they had cooked lasanga for us. Clear skies, possum spotting and Lasanga, what morre could one want.