Occultation of the Pleiades, November 16 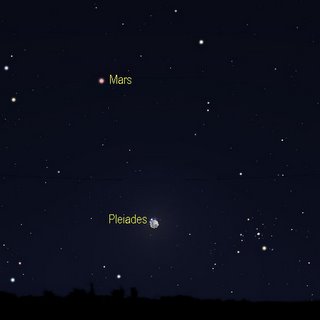 On the evening of Wednesday 16 November the Moon will cover (occult) the Pleiades. This will be the last occultation of the Pleiades to be seen from Australia for some time, so it will be worthwhile to have a look at this one. The weather forecast seems alright for the night as well.

The bad news is that it won't be very spectacular. The occultation takes place during the full Moon, when the brightness of the Mooon will drown out all but the brightest stars. It will also be visible only from the eastern and central states, Western Australia will miss out completely. It also starts shortly after Moon rise in all states, so the Moon will be low to the horizon. Nonetheless, there are a couple of reasonably bright stars that get covered and uncovered (Alcyone, Maia and Electra, depending on exactly where you are observing from), and this should be visible in binoculars, as well as small telescopes (but it almost certainly won't be an unaided eye event, unless you have exceptional eyesight).

More Mercury
Showering will never be the same again
More daytime Venus
My students certainly think I'm scary
Is there life on Mars?
A Mars a Day
Another shot of Mercury
Daytime Venus
Taurids for Guy Fawkes Night
Planets in the scope