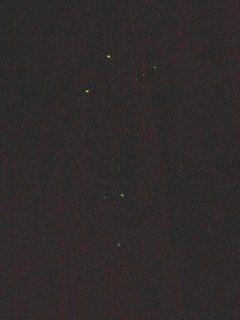 What constellation is this? (click to enlarge) Test your knowledge of the sky and have a guess. The image was taken at 11.00 pm facing South (answer at bottom of post).

I have a cold. But I also have a boy turning two, so instead of doing the sensible thing and going to be early, I assisted in Smallest Ones birthday bash[1]. In the process I pointed out daytime Venus to some of the adults[2], who were pretty amazed to see a planet in daytime, and a "footpath astronomy" session started. Footpath astronomy seems to be breaking out all over at the moment. Top of the Lawn and Stuart have had footpath encounters.

Well, the footpath astronomy didn't start immediately, first I had to do the barbie (which is more complicated than it sounds when you have to keep the vege barbecue away from the carnivorous barbecue while keeping industrial quantities of kids sausages [which appear to be made of sawdust and wallpaper paste] coming) and then dark had to fall, which takes longer now that daylight saving is upon us. But after the barbie was over, the telescope was wheeled out to the delight of adults and children.

The waxing Moon was fairly high in the sky, so we turned to that first, the crater Copernicus with its terraces was visible in high relief. We could see the ridges in the lava fields of Mare Imbrium and the mountains threw long shadows towards the terminator. Everyone was smitten by the stark beauty of the scene. Even if the kids were smitten momentarily, before rushing off to their games. My kids are quite blase about the telescope, seeing as I wheel it out at the drop of a hat, and all camping trips have telescope accompaniment.

After the splendors of the Moon, we turned to crescent Venus, which impressed the adults, most hadn't realised that Venus had phases, and I explained the significance of that. After a bit of cleaning up we finally turned to Mars. Mars wasn't high (it was a kids party after all, no one was staying late), so once again our friend turbulence came along as well. However, we could clearly see the dark bands and Syrtis Major on the limb. The kids came out again for this. A small round dot is quite hard for kids to see, as they don't have a feel for how thing should look in a scope, but they did see it, and were amazed at seeing our sister world. The adults were pretty impressed at seeing any detail at all.

Soon everyone had to go home, the party had lots of good memories to go home with (including my cool mega bubble mixture), and the sky views were one part of that.

Oh, and the constellation? It's luminescent dye from those luminescent circlets they sell at fairs. We had a batch that leaked, and I shot the drops that glowed on our floor. It was facing south though :-)


[1] Anyone who says "Oh, how could you miss out on you little boys birthday" has never tried to deal with several boisterous children without a functioning nose or throat.
[2] Man am I getting good at seeing Venus in the daylight. I no longer require the Moon as a "skymark" to find it. In the back yard I have several landmarks (posts an chimneys on the roof) which I can use to orient myself, and locate Venus pretty quickly. If you want to do it yourself, find a spot in you backyard where the sun is blocked from view in the early afternoon, and there is a good landmark (a tree or post). The wait for twilight, return to the same spot and note the position of Venus with respect to the landmark (you might want to use a ruler to get exact locations). You may want to check at various times as evening draws on, to be able to extrapolate Venuses position before sunset. Next day, return to the spot before Sunset, and look around the spot you have fixed with respect to the landmark. Venus should pop out at you fairly soon (make sure that the Sun is completely blocked from view to avoid eye damage)

Comments:
Ahh, a new cloudy nights activity: make your own constellations. I'll be looking for the 40° North kit :^D

Isn't it fun to see how kids react, and then sometimes confuse excited adults for kids.

Keep up the fine blogging.

H'mm, that could be a idea. My kids have those fluorescent stars you put on your celing, but the luminescent stuff actually loooks more like stars.

Yes, the pure unalloyed joy some people have is a joy to see.

Occultation of the Pleiades, November 16
More Mercury
Showering will never be the same again
More daytime Venus
My students certainly think I'm scary
Is there life on Mars?
A Mars a Day
Another shot of Mercury
Daytime Venus
Taurids for Guy Fawkes Night