( this is an experiment, I want to see if the Kp image linked to the IPS will automatically update) The current Kp index is 7, and there are aurora in the US and Canada at the moment, which may mean serious aurora in Tasmania and Southern Victoria if this current geomagnetic storm (5.00 pm ACST) continues on into the night (however, the solar wind index is 281 km/sec and Bz: -3.0 nT, which may mean any aurora may not be as dramatic as the last time). Keep a lookout tonight once the sun has set, look to the south after twilight. Victorians, South Australians and NSWelshmen should look for pinkish whitish glows which appear to shimmer or move, with the occasional ray shooting up from the horizon. Tasmanian's should see more dramatic curtains and rays. See "Live aurora blogging" and
"More aurora" for example of what aurora may look like from mainland locations. The First Quarter Moon may interfere with observations in the early evening. 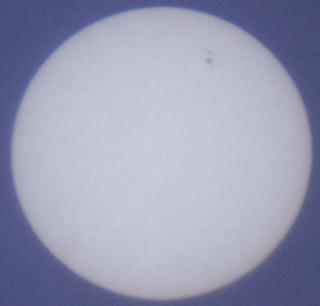 This is an image of Sunspot 798/808, which is the source of all the excitement. The image was created using safe solar projection techniques (it's not too clear as I had to do this in between clouds and rain showers, so my focus leaves a little to be desired). This goes to show that you can do interesting astrophotography without fancy equipment. Sunspot group 798/808 has been firing off flares at a rate of knots, there have been 7 X-class flares since the X17 one, not to mention the M class flares.