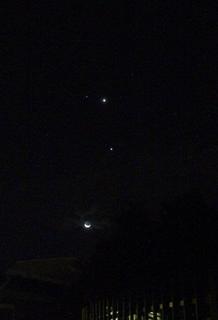 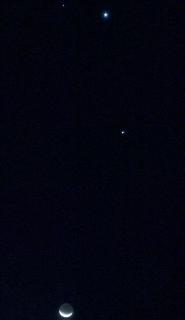 Images: The Moon joins Spica, Venus and Jupiter. As always, click to enlarge. I had planned to take a series of images from a fixed vantage point at the same time to show the movement of the planets. However, having small children puts paid to those plans even when the weather is kind. After dealing with Smallest Ones "terrible two's" training performance, it was well and truely dark. Still, it looks rather pretty.

I wanted to get a picture of Venus reflected in the sea, which I saw last night on the way to the shops sans camera. After homework, finishing the dishes and putting the boys to bed, I headed up the beach. By which time the clouds were boiling over the horizon and spectacular lightning strikes were lighting up the sky. Sadly, despite multiple trys I only caught the tail end of one lightning bolt. It's raining now, it might clear up by tomorrow night.