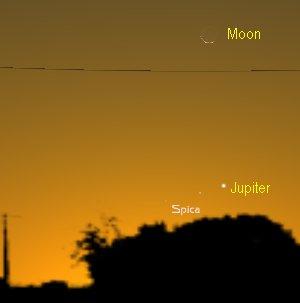 I couldn't resist playing with Stellarium some more. The image is of the coming conjunction of Mercury and Jupiter (Mercury is the dot between Jupiter and Spica, I didn't want to add a label as it would clutter the image), between October 3-7. It will be difficult, as the planets will be around a handspan from the horizon at civil twilight. I have written a Stellarium Script for this event. As before, save it in the folder /data/scripts, then press M and use the arrow keys to cycle to the script menu.

I've also cleaned up my Pleiades Occultation script, thanks to the Stellarium Forum folks. I now have a utc date option and a much better way of slewing to the Moon. Commands for writing Stellarium Scripts can be found here.

Occultation of the Pleiades, September 22-23
Mercury at Inferior conjunction
Remember Venus?
Titan's Seas found?
Next Monday is International "Talk Like a Pirate" day
So why does it happen?
..but then nothing much happened.
Did I mention it was cloudy?
Waiting for Aurora
X Class Flare CME now expected to arrive Thursday 15