Following the X17 flare, there have been no less than five X class flares from Sunspot group 798/808 in the past 24 hours, including an X6 flare. Not to mention a number of M class flares. Unfortunately, there is an S2 proton storm on at the moment, due to the effects of the giant flares from 798/808, and the SOHO instruments are unable to tell us if any of these flares had Earth directed components (although it is a good bet that the last X6 flare has sent a coronal mass ejection our way). The ACE spacecraft, which is the source of most solar-wind data has also been blinded by the recent events, so we don't really know what is going on with these CME's. 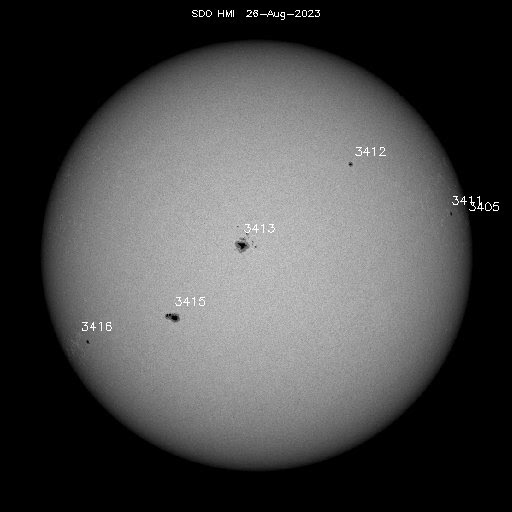 So watch the night skies to the South (if you are a Southern Hemisphereian) or North (if a Northern Hemisphereian), as there may be a chance of aurora (most likely visible from Tasmania and southern Victoria, but you never know). Given the level of activity, it is likely that there will be more strong flare activity, possibly even more X class flares, when the sunspot grouping is more favorably placed for generating aurora. Sunspot group 798/808 is so big that it can be seen using safe solar projection techniques.

Comments:
Wow. Look at all those cosmic ray impacts on the SOHO images.

However strong the flare is, I don't think it will be visible through all the cloud and rain that is currently sitting over Manchester. Typical!

If the Sun stays active through to the start of October, it may make the annular eclipse quite interesting.

Thanks for keeping me up-to-date with the Sun Ian.

Don't worry, it's clouded out here too. Not sure if 798 will be still on the Suns face then, but the activity will probably be still a bit higher than usual for this part of the solar cycle.