More images from the Conjunction 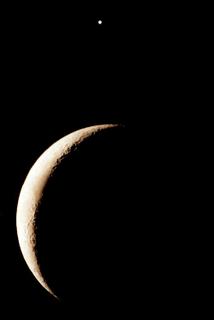 Well, I didn't get to put the images up last night, tiredness got to me first. The image is on of my more successful film images shot through the telescope. The film camera is not dead yet. Sadly, the Moon is somewhat over exposed, but the better definition shots also had high background due to the develpment forcing the exposures to similar brightness levels.

I also pronmised links to other images. Follow this link to some stunning images by Shevill Mathers of Tasmania. Some other images of the conjunction using conventional digital camreas can be found here and here. 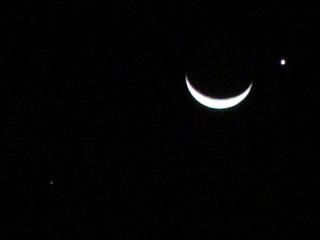 You might be interested in Peter's adaptor which allows him to use the digital camrea with a small birding telescope. He successfully used this setup to take images of the opposition of Mars in 2003.
As many people have binolclars or a small telescope, rather than a fully fleged astronomical telescope, you can use similar setup to Peter's to adapt digital cameras to these instruments, and take images of some of the brighter astronomical events (like lunar eclipses, or this line up). I've run some test images throught my 10x50 binoculars, and have yet to try an astronomical photo, but I will have a go soon and report back (of course, the clouds are back).