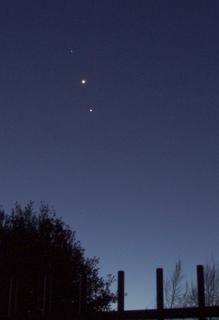 Image, top to bottom, Spica, Venus, Jupiter, as always, click to enlarge.
It was Fathers Day in Australia yesterday (Sunday). The cloud and rain that had obscured the conjunction of Jupiter and Venus finally went away (especially Saturday when Eldest One played soccer in the pouring rain while devoted parent watched his sodden son from under an umbrella and raincoat). The day started auspiciously. When I tried to get up, Eldest One told me I had to stay in bed, it was Fathers Day. So I got breakfast in bed (although Smallest One drank all my apple juice), and was duly presented with a variety of lovingly made cards (Middle One's was a folding out Bear; "he's eaten someone!" Middle One said joyously) a hand made keyring tag and a book mark with a bottom on it (from Eldest One; now inserted, without too much irony, in Simon Winchester's "Krakatoa") and a 3 D cell Maglite.

I've had a minimaglite for ages, a beloved present from the Bettdeckererschanppender weisel, which has been my constant companion on bush walks and, covered in red cellophane, during my astronomy nights. Bright, dependable, economic with the batteries and with a handy headband for hands free use (I look a dork using the headband, but I look a dork to start with, so there is no downside) I really like my minimaglite. But now it has a rival in MegaMaglite.

This thing is a monster, it can melt bitumen at 40 paces. It will come in very handy when bushwalking for spotting night life (in other states even) and while it is no green laser pointer, I can use its narrow focus beam to point out stuff in the sky, as it has a very visible beam. I can see me and Mega having a long and fruitful partnership.

Anyway, after my luxurious breakfast repast, we cycled down to the beach to help the local coastcare group remove noxious weeds. With a startling blue sky above, waves lapping gently on the beach, native daises and pigface flowering, what could give one more satisfaction than extirpating invasive weed species? Well, according to the boys, playing in the park, so we did that too.

After a lovely day out, especially after being cooped up for so long by the foul weather, we were home before night fell. When dusk thickened, I got out my trusty Olympus and fired off a series of shots of Venus, Jupiter and Saturn in nearly a straight line. Inspired by Stuart, I took a series to make an animation. Hopefully the weather will hold for Wednesday, and the Spica Moon Venus line up. Venus will be 12' from the Moon here in Adelaide, so I have my various astrocameras and imagers ready to go to record this.

Images in the camera, I cuddled Smallest One to sleep, and sat with the older two while they drifted off, through their door, out the kitchen window, I could still see the gleam of Venus. Could you ask for a better Father's Day?

Comments:
You can't! Great idea for an animation, hope it works out. STAY AWAY CLOUDS!!

That's a nice image, I look forward to seeing the animation :-) Fingers crossed that you get better weather this time, the forecast for here says partly sunny with poor visibility so I'm guessing that it's going to rain...

Do you mind if I use your image in this talk tomorrow? I want to show how quickly the planets appear to move accross the sky, real photos are much nicer than using screenshots from planetarium programs!

Go Ahead, do you want the image from the day after? I have it but haven't posted it yet.

Yes please Ian, that would be great!
Thanks,
Megan

Megan, I've put up the image on Astroblog under "more conjunction images". Later I can put them in an FTPable site if you like.