A Beautiful View of the Line Up 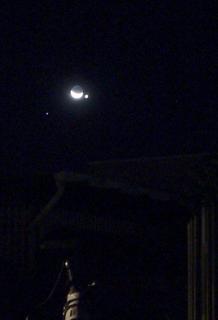 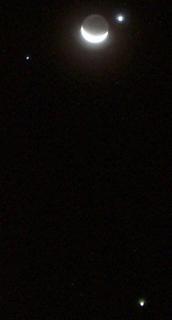 Images: Left, The Moon, Venus and Spica above my telescope. Right, The Moon, Venus (the bright one next to the Moon), Spica (the dim one on the other side of the Moon) and Jupiter (the one down the bottom; as always, click on the image to enlarge).
Well, that was truly beautiful. After all the rain and son on the sky was as clear as could be, I could see Venus and the Moon on my way home from the train shortly after sunset, and as dusk gathered Spica and Jupiter popped out to complete the celestial meeting. Eldest One thought it looked good, the neighbor was delighted, even the Bettdeckererschnappender weisel thought it looked beautiful, and she is somewhat uninterested in things astronomical.

My photography was not so effective though. I had a plan, it just didn't cope very well with Smallest One having another "terrible two" moment and the trusty Olympus choosing for some reason to take out of focus images. The Camera is on a tripod, triggered by a remote, and there was virtually no wind at all (and the camera was in a sheltered spot) yet 2/3rds of my images are out of focus (sigh), mostly the "scenery" shots showing the grouping with landscape items, rather than having them as dots floating unconnected in space. Anyway, enough shots came out to keep my memories going.

I also shot some images through the telescope using the Pentax and the webcam. As I said, I had a plan. Webcam first, then film. This is because the webcam is a pain to focus, and the webcam, film camera and eyepieces all have different focuses (and both cameras are so bizarrely out of tune with the eyepieces and each other I can't use parfocal rings), as the scope was currently focused to the webcam, it made sense to shoot with the webcam first (also, having a greater effective magnification, it is more sensitive to turbulence).

So of course I shot the film camera first. Hopefully I will get the images back tomorrow, I shot several exposures at several exposure times to bracket the brightness, so something should work (although Venus will just look like a bright star). Then onto the webcam, having to refocus it was a struggle, the I finally got it set up, shot a few quick images of Venus, and then was in the process of aligning the cam so I could get Venus and the Moons limb in the same shot (not helped by yours truly knocking the finder scope out of alignment (Tom, you can laugh now), so repositioning the Moon was painful), when Smallest One had another "terrible two" episode which needed my attention. By the time I came back, over half an hour later, the Moon had set behind the houses. At least I had a Venus shot, not lots of detail of course (must invest in a violet filter), but above you see tonight's shot next to an image I took back in July. Venus is much bigger and obviously more gibbous. So at least my Venus Phase photo essay is on track, almost. 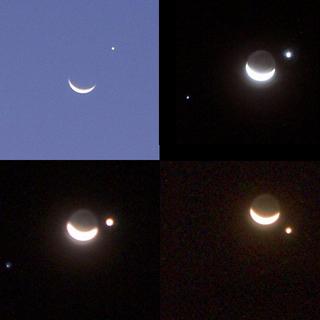 During the course of the evening the Moon moved with respect to Venus, this series of shots illustrates this movement. Could have done a nice animation if 2/3rds of my shots weren't out of focus.

But in the end, the night was clear, the air was balmy, the planets and Moon looked beautiful, so I am greatly satisfied.

Comments:
Glad you got to see it! We had a nice view of the cresent Moon at sunset when the group members arrived, but it set behind the trees before getting dark enough to see the planets. Thanks for the use of your images, I think a few more people have now been persuaded to try this for themselves :-)