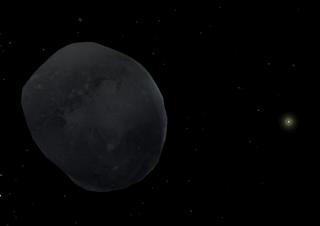 Over at Stuart's Astronomy blog is a nice spotters map for 2003 EL61. WHile 2003 EL61 and 2005 FY9 are relatively brignt so that amateurs with big telescopes can see them, they are in the constellation of Coma Bernices. This is very low to the horizon for most of Australia. 2003 UB313 is in Cetus, and quite well placed for Australian observers, although at magnitude 18.8 you will need a grunty scope.

Rather than try and post spotters maps here, I've opted to generate some scenes using Celestia. I downloaded the orbital elements from the Minor Planet Centre, then hand-rolled the elements into Celestia format. The first image is 2003 EL61 and its moon looking back to the Sun (click to enlarge or you won't see the tiny moon.) 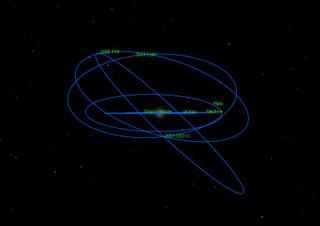 The next image shows the three new transneptunians with repect to the orbital plane of the planets as seen form 150 AU away. You will need to click on the image to see the detail. This gives you an idea of just how tilted they are.

[update] Sat 6 Aug. If anyone wants the Celestia .css files for these objects, ask me and I'll send them in a couple of dyas. I have to sort out some issues with 2003 EL61's moon, and I need a paper I can't access for a few days. Iterestingly Celestia automatically makes UD313 a planet. think about that IAU.

It's not I just ran out of KBO style identifers for the JPG's I was creating and started on Plutinos for no better reason than it was the first thing that popped into my mind that was vaguely TNO/KBO related that I hadn't used and that I could remember when uploading files.