We Southern auroraphiles are still recovering after last nights spectacular (well for most of us, it wasn't as visually impressive compared to the great shimmering sheets of colour seen in more southerly regions like Tasmania (see above) where red rays shot up to the Zenith, but it was visible over a big chunk of Australia, and it lasted a heck of a long time, one of the longest auroral events I know of). The Bz reading went down to -60 nTelsa at one stage. 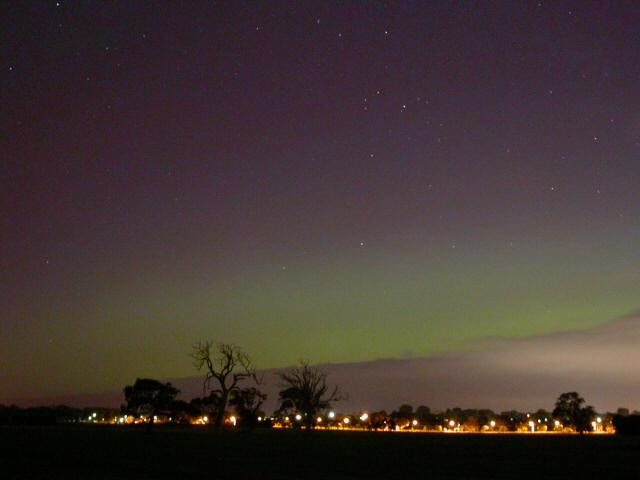 There is a good thread on the aurora on the Ice in Space Forum with some great pictures. However, it doesn't seem to have been reported much in the mainstream media, nothing in the Age, and a short report on ABC online. New Zealnd Observers seem to have seen more spectacular views, but weather was a problem at a lot of sites.

As you know, I saw only a faint whitish glow on the souther horizon. Other Adelaideains, observing from darker skies, saw beams, rays, and the occasional faint curtain. It might have been nice to go out to a dark site, but I was minding the kids, and Smallest One gave me a really fantastic cuddle, so it was not so tragic.

Comments:
Great pictures! I didn't see anything nearly that colorful. More like spires pointing south from the north, always a nice sight though.